As Julie Urbanik vividly illustrates, non-human animals are central to our daily human lives. We eat them, wear them, live with them, work them, experiment on them, try to save them, spoil them, abuse them, fight them, hunt them, buy and sell them, love them, and hate them. Placing Animals is the first book to bring together the historical development of the field of animal geography with a comprehensive survey of how geographers study animals today.
Urbanik provides readers with a thorough understanding of the relationship between animal geography and the larger animal studies project, an appreciation of the many geographies of human-animal interactions around the world, and insight into how animal geography is both challenging and contributing to the major fields of human and nature-society geography. Through the theme of the role of place in shaping where and why human-animal interactions occur, the chapters in turn explore the history of animal geography and our distinctive relationships in the home, on farms, in the context of labor, in the wider culture, and in the wild.
Rowman & Littlefield Publishers (23 July 2012) £17.95
Posted by Welcome to the AGRN at 14:34 1 comment: 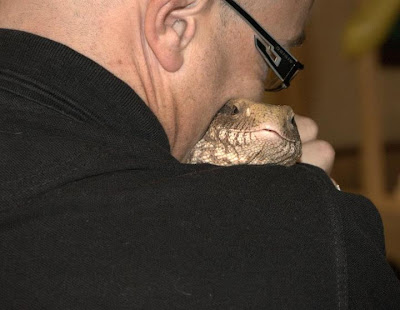 Call For Papers:
Fourth International and Interdisciplinary Conference on Emotional Geographies
1-3 July 2013 at the University of Groningen, The Netherlands

Beyond geography there is a general acceptance that humans have an emotional connection with animals (Wilson, 1984; Urbanik, 2012). Despite a concerted effort to ‘put life back into the discipline’ (Spencer and Whatmore, 2001), individual animals remain ‘somewhat shadowy presences’ (Philo, 2006) in geography. It is collectivised categories such as livestock, wildlife, captives, companions, experimental subjects, political, edible and sexual objects, which have emerged from the margins to animate more-than-human geographies. Research on the individuality of living beings and their role in subjective human emotional experience are distinctly lacking.

There are exceptions which flirt with these ideas. Chris Bear (2011), whose paper focused on Angelica the Octopus, called for greater attention to be paid to the lived experience and encounters of individual creatures. Sushrut Jadhav and Maan Barua (2012) considered the impact of human-elephant conflict on people’s wellbeing. There have also been recent papers on the autistic autobiographies of the natural world (Davidson and Smith, 2009), and even human-animal intimacy (Brown and Rasmussen, 2010; Griffin, 2012). Perhaps for fear of sentimentalism, scholars other than those from the feminist care tradition (see Donovan and Adams, 2007), have avoided this topic.

This session draws inspiration from Donna Haraway’s, When Species Meet (2007). For Haraway, ‘species of all kinds, living or not, are consequent on a subject- and object-shaping dance of encounters’. Whether it is in the home, field, factory or zoo, these shared experiences are loaded meaning and emotion. Such interspecies encounters generate questions of who we are and how we feel. This session encourages autobiographical and biographical papers in relation to individual animal or individual species encounters.

Please send abstracts of about 300 words to both Daniel (d_n_allen@hotmail.com) and Bettina (b.van.hoven@rug.nl) before January 10th, 2013.
Posted by Welcome to the AGRN at 16:54 No comments: 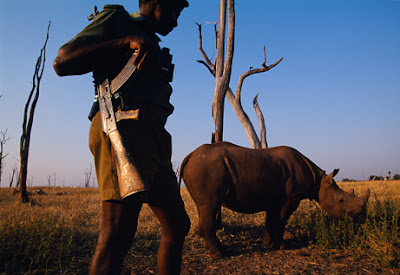 The emergence of a ‘more-than-human geographies’ approach to the natural world has seen the dissolution of nature-culture binaries, challenged understandings of “the animal”, and heightened the appreciation of hybridity and subjectivities. Despite these important developments, it has been suggested that ‘something is lost’ with this analysis; and the danger of denying difference altogether remains (Castree, 2003). As Philo (2005: 829) reflects: ‘might it not be that the animals – in detail, up close, face-to-face, as it were – still remain somewhat shadowy presences? They are animating the stories being told, but in their individuality – as different species, even as individuals – they stay in the margins.’

This ambitious session strives to reconsider the original aims of the new animal geographies project, documenting all manner of encounters between humans and animals, showing the spatiality of human-animal orderings, and revealing how such relationships shaped ideas, practices and identities throughout history (Philo and Wilbert, 2001). The session welcomes papers engaging with human-animal encounters in secure places, landscapes of defence, spaces of security and insecurity. Possible topics could include: animals in warfare, detection species at home and in the workplace, animals as both forms of security for and devourers of property, encounters with dangerous species (captivity, taming, killing), securing indigenous and endangered species populations, animal protection through welfare and rights. The session will showcase the rich variety of human-animal research in social, cultural and historical geography. By bringing together ‘retold stories’ (H. Lorimer, 2005) and ‘responsible anthropologies’ (Johnston, 2008) it is hoped this session will keep non-human animals out of the shadows of marginality, and also help secure ongoing contributions from the field of animal geography.

This conference is the second in a series of conferences about scientific, ethical and social issues related to human interactions with and uses of animals.

The aim of the conference is to bring together academics from different areas (animal welfare, animal ethics, and animal studies in general) with politicians and a broad variety of interest groups. The conference offers a platform for exchange of information about research developments, debates about controversial political and ethical issues concerning the treatment of animals and a variety of cultural activities around animals.

Click here to see poster with more details.
Posted by Welcome to the AGRN at 00:57 No comments:

The British Animal Studies Network is back. Having run over ten meetings between 2007 and 2009 in central London with the support of the AHRC and Middlesex University, BASN will be re-launched in central Glasgow in May 2012, with the financial support of the University of Strathclyde. Under the leadership of Erica Fudge once again, it is hoped that the new home for BASN will welcome both old and new members to join the multidisciplinary and interdisciplinary conversations about humans and other animals.

The topics for the first three meetings will be:
The meetings in Glasgow will take a different form from those in London. They will run over two days – from Friday afternoon until Saturday early evening. Papers will be by invitation and also by open call, and there will – as before – be plenty of time scheduled for informal conversation and socialising.
To receive further information about meetings, dates, cfps, etc. please join the BASN mailing list.

Details of the first BASN-Glasgow meeting and the call for papers are now available.
It is hoped that these meetings, as with those held in London, will be attended by a range of people involved in animal studies and related areas. This might include scholars and postgraduates working within the field; scholars from outside of animal studies who are beginning to recognise the significance of studying the role, place and perception of animals; people from non-academic institutions – animal welfare charities, museums, NGOs; and artists who are representing and thinking about animals in their work.

(All images on the BASN website come from Special Collections in the Andersonian Library at the University of Strathclyde, and are reproduced with permission.)
Posted by Welcome to the AGRN at 00:43 No comments:

Critical Perspectives on Animals in Society 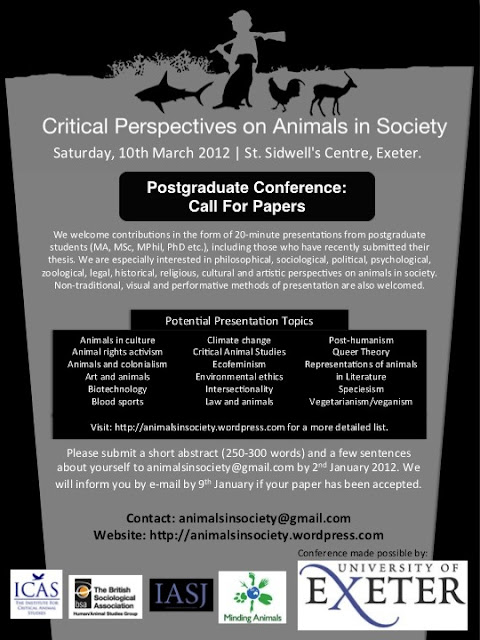 Posted by Welcome to the AGRN at 00:34 No comments:

Hard to Handle. The Aesthetics and Politics of Specimens on Display 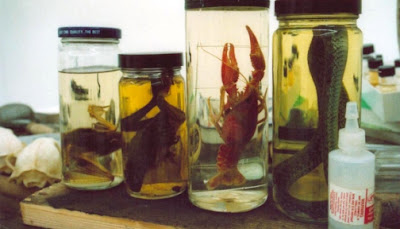 Upcoming event:
International Conference
Hard to Handle. The Aesthetics and Politics of Specimens on Display (working title)International conference at the Department of History of Art, UCL
17-19 May 2012
More details to be announced soon!
For further information please contact
Mechthild Fend m.fend(@)ucl.ac.uk or Petra Lange-Berndt p.lange-berndt(@)ucl.ac.uk
Posted by Welcome to the AGRN at 00:11 No comments:

Welcome to the AGRN
The Animal Geography Research Network was established in September 2011. The network brings together individuals working on human-animal relations from across the discipline of geography and beyond. The network is striving to be an international and interdisciplinary network with a broad range of academic and non-academic research outputs. The central aims of the AGRN are to: (1) Develop animal geographies to make it an area which is increasingly of central importance within the discipline, through research, teaching, conferences and publications. (2) Strengthen ties with the AAG Animal Geography Specialty Group and broader groups with an interest in human-animal relations. (3) Encourage interdisciplinary collaboration with the aim of shaping broader research in human-animal studies. (4) Stress the role that animal geography can have on engaging and influencing wider policy making and public communities across the world.